12 Months of Modelling Dynamics and Properties 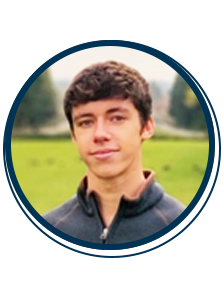 This October Joe Abbott of BIOVIA’s Cambridge Office will complete a productive 12-month internship as a software developer with BIOVIA’s Quantum Mechanics group.

Multiple COVID-19 lockdowns have turned this year into a peculiar experience of working remotely, and even contracting and recovering from COVID himself. Thankfully, he persevered.

There is valuable software coming out of Joe’s work, as well as a presentation at an international conference and a scientific paper in the works.

Ironically, it seems only fitting that this highly energized scientist at the beginning of his career has spent 12 months working on battery-related projects.

Joe graduated from the University of Bristol in the summer of 2020 with an MSci in Chemistry with Study Abroad. He wrote his Master’s thesis on Quantum Dynamics of Bath Influenced Excitonic Energy Transfer in Photosynthetic Pigment-Protein Complexes. It won two best Master’s project prizes.

He spent his third year abroad at the University of Washington in Seattle. Here he learned coding with an emphasis on software and data science for scientific research. He worked on many interesting and diverse projects, from predicting insulin expression in yeast using neural networks to probing spectroscopic signatures of doped nanodiamonds. He also took intensive classes in quantum and computational chemistry.

After returning to the UK, he spent the summer developing scientific software at the particle accelerator at the Harwell science campus. Then he completed his Master’s thesis on quantum dynamic models of light harvesting in green sulfur bacteria. By then he was sold on the power and versatility of computational science and ready for a new challenge!

He saw the posting for a battery modelling internship at BIOVIA and he knew that it would be the perfect opportunity to extend his skills in theoretical chemistry and software engineering. When interviewing for the position, Joe learned about the scale and impact of BIOVIA’s R&D team.

He was very excited about the prospect of building innovative and practical modelling solutions:

Being interested in clean energy, I knew that battery research would be rewarding, especially now with batteries playing a critical role in reducing our reliance on fossil fuels.

Ageing of lithium-ion batteries (LIBs)—the process by which battery performance reduces over time—is an active area of research today.

Degradation of the liquid electrolyte, a mixture of solvents, salts and additives on the surface of the battery anode forms a structure called the solid electrolyte interphase (SEI). This deterioration consumes lithium that would otherwise be able to carry charge, causing capacity fade and contributing to battery ageing.

The SEI is a microscopic structure formed by a complex cascade of many competing chemical and electrochemical reactions on the atomic scale. Computational simulations of SEI growth advance the development of high-performance LIBs by supporting important workflows in electrolyte design and optimization.

My first project at BIOVIA focused on integrating reactive steps into classical simulations in BIOVIA Materials Studio. I started with developing a generalized tool that executes virtual reactions. I then wrote an algorithm that integrates this tool, controlling a procedure of reaction sampling, virtual reactions and molecular dynamics.

Next, by pre-characterizing reaction pathways with highly accurate quantum simulation techniques, physical corrections could be introduced as refinements to the algorithm. As a result, we can now leverage classical simulations to model large systems over long timescales whilst considering the quantum-level details of individual reaction pathways.

We used this to simulate the initial stages of SEI growth in LIBs, but in principle this can be applied to modelling any reactive liquid. I am currently preparing a paper on our approach and its application to SEI growth.

Liquid electrolyte batteries are the dominant technology at present but another emergent area of battery research involves the development of all-solid-state batteries – ASSBs. 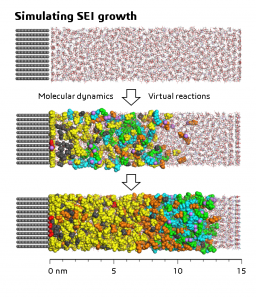 In my second project at BIOVIA, I have harnessed BIOVIA Pipeline Pilot to query external databases for thermodynamic data and crystal structures of many known battery materials.

This data is then used to calculate the relative stability of novel materials and predict their decomposition and reaction products, especially at the electrode/electrolyte interface. It will be a useful tool in the ASSB design process.

Due to COVID, Joe has been working at home for most of his year with BIOVIA. Whenever he needs a battery break – a recharge, he stays active by walking and cycling.

Even though he lives in his hometown, he still finds interesting routes and new spots when exploring. Joe has also been relearning the piano, and enjoying reading and cooking in his free time.

Now that things have opened up a bit, Joe has been able to visit friends and family further afield. He also enjoys going on camping trips and staycations to national parks and beaches.

In conclusion, Joe describes how grateful he is for his time at BIOVIA.

The experience has allowed me to develop valuable skills in industrial software development, scientific research, presentations and paper writing.

In his own words:

Joe had the opportunity to share his work with various audiences through tutorials, internal training sessions, talks and a showcase of the team’s scientific findings at the 2021 international Virtual Materials Design Conference.

Finally, I would like to thank Felix Hanke and Victor Milman of the BIOVIA Science Council for mentoring and challenging me during my internship, as well as many others at BIOVIA for their help and support.

My experience at BIOVIA increased my confidence about the next step in my career—tackling a PhD with lots of practical, hands-on experience under my belt.