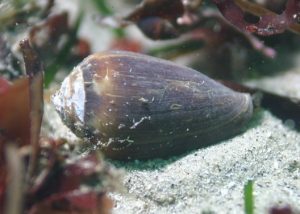 Predatory marine snails inject their prey with venom intended to paralyze them; fortunately, it appears that many of the proteins contained in the venom may be beneficial to humans.
Image Source: Wikimedia Commons User: Steve Lonhart

Ladies and gentlemen, this is the age of science fiction. Granted, researchers have yet to actually make a functioning tricorder, but they have not been idle. For the better part of the past decade, scientists have been sifting through all of the proteins that comprise predatory marine cone snail venom, which could be a fantastic solution for diabetics, specifically those that are type 1 or otherwise insulin dependent.

Assessing the molecular dynamics and modelling the homology of the slurry of proteins was performed using innovative lab software, allowing scientists to identify some fascinating properties. It appears that in an evolutionary attempt to paralyze more marine species, they developed the ability to produce a protein that performs as a fast-acting insulin.[1] Although its implications are still being sussed out, this is a very important discovery and there are likely to be even more groundbreaking discoveries from assessing this venom.

What’s in a Venom?

Venoms are toxins secreted by an animal for the purpose of harming another creature. Generally, these are used for defense or for hunting. For example, the cone snail, a class of predatory marine snail, uses its proboscis to deliver a venom cocktail that paralyzes its prey. Venoms provide a plethora of new opportunities for researchers looking for applications to human health, which are becoming more easily identified as lab software improves. They can yield:

Many researchers have theorized that there may actually be an arms race going on within different venomous species. They are obviously diversifying to get prey that is regionally dependent, but they also have to compete with well-established predators.[5] Species such as cone snails and snakes, appear to be providing scientists with a rich hunting ground for therapeutics due to this diversity. Lab software that enables modelling, both in homology and molecular dynamics, has advanced greatly in the last few years. This allows researchers to better identify targets and actions to better understand the mechanisms of action behind toxin function.

One of the most fascinating things about this discovery is not that this is a fast acting insulin, but that modern software could figure out why it is a fast acting insulin. Once this insulin was modelled and the molecular dynamics were assessed, scientists realized that there was a major structural difference in this insulin: it was missing a hinge. Endogenous human insulin undergoes structural changes in order to function within the body—specifically, a hinged portion has to open before interacting with the receptor. Anytime extra steps are added to a process, it takes longer. The snail insulin had done away with the component entirely, and innovative lab software helped investigators identify that this was a key factor in its rapid action.

Faster acting insulin could be a very beneficial emergency rescue drug, but that’s only the beginning. No concrete information has been released regarding the exact therapeutic that’s being developed, but it could be anything from a diabetic EpiPen to a new variation on the regular injectable insulin. All that aside, that there are so many other proteins within cone snail venom and many other types of venom that have yet to be fully examined. BIOVIA Discovery Studio has new steered molecular dynamics free-energy simulations, which allows researchers to estimate ligand binding free energy and study protein unfolding or conformational changes. In the situation above, these tools would be indispensable and would allow for researchers to save lots of time and R&D dollars while plodding through and using multiple programs for the same analyses. Please contact us today to learn more about how our software options can support the efforts of your lab

[5] ”The Rise and Fall of an Evolutionary Innovation: Contrasting Strategies of Venom Evolution in Ancient and Young Animals,” October 22, 2015, http://journals.plos.org/plosgenetics/article?id=10.1371/journal.pgen.1005596