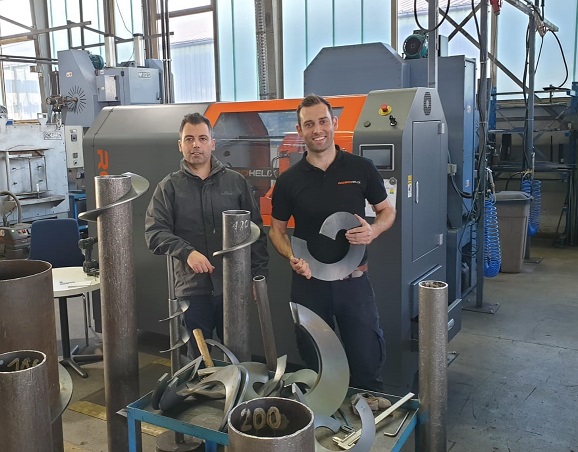 Auger centrifuges are versatile and effective material handling tools, critical to the conveyance of materials in material handling, geotechnical and mining projects. Smooth material displacement operations for such projects depend on the precision of the auger fins or blades, commonly referred to as “flights”, formed out of stainless steel or abrasion-resisting steel.

Traditional forming of auger flights utilise hydraulic machines that wield bulky industrial dies, die plates and platens to form the pitch and size of flight diameters. These die plates and platens are often bulky to handle and time-consuming to tool, adjust and set up, not to mention cost-prohibitive to replace if they are damaged.  the hydraulics are manually operated with the operators hands just millimetres away from reciprocating jaws exerting forces up to 50 tonnes, operator injuries are a high risk, resulting in calls for higher safety standards in helical flight production.

RoboHelix machines incorporate robotics that completely automate flight production. Utilising HelixNinja, a cloud-based SaaS, the RoboHelix machine applies mathematical algorithms to calculate, analyse, and mimic the natural helical forming path. At the same time, these algorithms can automatically compensate for material elasticity of augers during the flight forming process, thereby doing away with manual human measurements or calculations that would have otherwise required repeated manual checks and validations.  In addition, the entire flight forming process is enclosed within the RoboHelix machine, which makes it far safer for operators and eliminates the incidence of injuries. With these innovations, RoboHelix machines have proven to increase flight formation set-up rates by up to 45 times and decrease power consumption of flight production by up to 300 times. 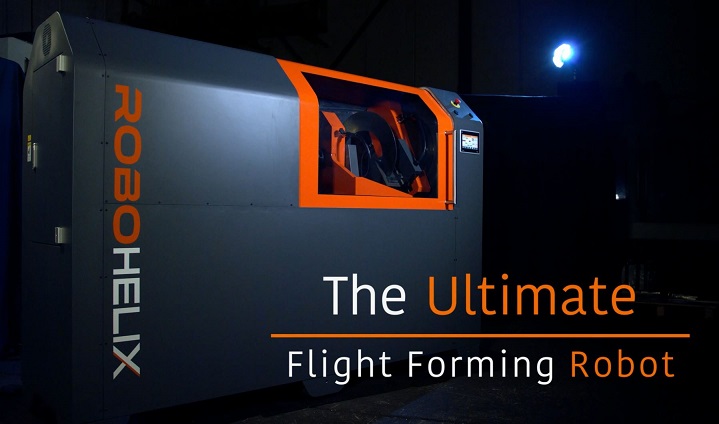 Over the past five years, the Australian manufacturing industry has been at an inflection point amid rising competition from lower cost countries in Southeast Asia. Advanced automation solutions for manufacturers, such as those provided by RoboHelix machines, offer Australia the opportunity to regenerate its manufacturing industry and contribute to global supply chains.

“We developed the RoboHelix prototype based on the deficiencies we saw in traditional  flight forming methods and to introduce a robotic system to automate  flight movements,” said Hayel Smair, CEO and Founder of RoboHelix. “Flight formation is a very precise science. Dassault Systèmes’ SOLIDWORKS design and simulation applications were integral for us to develop an 8-axis robotic system capable of handling the tolerances necessary for the precise nature of flight production.”

According to IDC the global robotics market was worth $151 billion in 2018, and is expected to double to $210 billion by 2022[1]. By building its revolutionary flight forming 8-axis robotic systems with SOLIDWORKS applications, RoboHelix has become a global exporter to major auger and material handling equipment manufacturers based in Europe and the USA within just two years of its inception.  RoboHelix will continue working with the new features of the SOLIDWORKS 2020 portfolio of applications as the company expands and looks to introduce more innovative robotic technologies into its range of flight manufacturing solutions.

“Dassault Systèmes’ SOLIDWORKS provides the design and simulation capabilities for robotics engineers to bring their innovative concepts to production, allowing them to come up with functional prototypes quickly and launch their final products to market smarter and faster. We are proud to be the technology partner of RoboHelix, one of Australia’s most exciting ‘Garage to Global’ startups, in introducing innovative robotic technology that is revolutionizing traditional manufacturing methods in a big way,” said Sox Konno, Managing Director, Asia Pacific South, Dassault Systèmes.